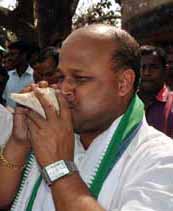 Odisha Channel Bureau Bhubaneswar, July 31: With his father Biju Janata Dal’s Rajya Sabha Member Kalpataru Das coming under criticism from various quarters for their family members taking multiple plots and houses of under discretionary quota, BJD MLA from Dharamsala Pranab Kumar Balabantaray surrendered one flat on Thursday on “moral ground”.The family of Das had come under fire for taking several houses and plots in Bhubaneswar and Cuttack and there was speculation about Chief Minister Naveen Patnaik taking action against the Rajya Sabha Member.After writing a letter to Vice-Chairman of Bhubaneswar Development Authority surrendering Flat No.E-09 at Netaji Subhas Enclave in Gadakana area of the Capital city, Balabantaray wrote a letter to the Chief Minister saying that he had surrendered the flat on moral ground to upkeep the image of the party and Patnaik’s leadership.“I am to inform you that on moral ground, I have surrendered the flat to the Vice-Chairman, Bhubaneswar Development Authority to upkeep the image of the party and your leadership,” Balabantaray said in his letter addressed to the Chief Minister.This is not the first time that a ruling party leader has surrendered a house to the BDA after facing criticism in the public.State Rural Development Minister Bikram Keshari Arukha had surrendered an extra house allotted to his family in Bhubaneswar in 2012.