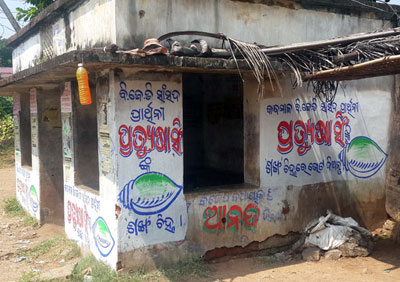 Odisha Channel Bureau Phulbani, Oct 13: Campaigning for by-election in Kandhamal Lok Sabha constituency ended on Monday evening.Polling is scheduled to be held on Wednesday (October 15).On the last day of campaigning, the three major parties involved in the contest organised series of meetings to woo the voters in their endeavour to win the by-election.While ruling Biju Janata Dal is confident of emerging winner in the triangular contest, Congress, which had finished second in the elections held earlier this year, is striving hard to maintain the same position.Bharatiya Janata Party, however, is using all techniques by arranging support from active workers of both BJD and Congress to either win the by-poll or at least finish second putting Congress behind in the race for votes.The nominees who are in the fray vying for victory are Pratyusha Rajeswari Singh, Abhimanyu Behera of the Congress and Rudra Madhab Ray of BJP.Singh is likely to draw sympathy votes as the by-election was necessitated by the untimely death of her husband Hemendra Chandra Singh.Behera, who contested 2004 Lok Sabha election from Kandhamal, is a former legislator, and Ray is a former BJD MP from Kandhamal.While Chief Minister and BJD president Naveen Patnaik and a host of Ministers and senior leaders campaigned for Singh, Jayadev Jena and many senior leaders of Congress campaigned for Behera.BJP campaign was led by K.V.Singh Deo, Bijoy Mohapatra, Jual Oram and Dharmendra Pradhan.While BJD highlighted the achievements of its government in the State, the BJP was seen wooing voters by highlighting the achievements of the Narendra Modi Government at the Centre.The Congress took up the twin issues of corruption under the BJD rule and the communal agenda of the BJP.According to political analysts, final outcome may not surprise anyone if BJD retains Kandhamal when counting of the votes polled on October 15 are counted on October 19, but if BJP becomes successful to finish second and stay ahead of Congress.Meanwhile, adequate security arrangements were being put in place in the seven Assembly segments under Kandhamal Lok Sabha seat to make the polling process free and fair.