Student hospitalised after beaten by teacher 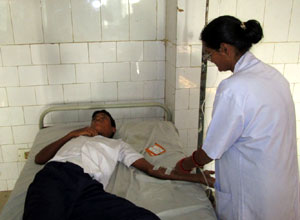 Odisha Channel Bureau Kendrapara, Dec 9: In the latest instance of school students being inflicted corporal punishment, an eighth standard student of a government-run high school in Kendrapara Township was allegedly beaten up by a school teacher on Monday. The victim Gulfan khan (13) of Gulanagar high school who sustained injuries on his head and right arm was hospitalized.The accused teacher allegedly beat up the student by duster as he failed to solve mathematics problems.The incident triggered tension as parents and guardians sought for penal action against the erring teacher.Hakim Khan the father of the injured student said “My son was assaulted by the teacher.The accused should be taken to task”.“Teachers have been asked not to subject the children to corporal punishment.The said incident is being departmentally inquired,” said District Education Officer Markat Keshari Ray.The Odisha Government had imposed a ban on corporal punishment in all State-run and private schools in the state in September 2004.The governmental guidelines had ordered that no kind of physical punishment is meted out to students studying in schools across the State.