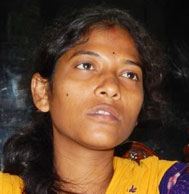 Odisha Channel Bureau Bhubaneswar, Jan 20: The Supreme Court has asked the Central Bureau of Investigation to probe the murder of Itishree Pradhan, a lady teacher who was murdered in Rayagada district of Odisha in October, 2013.Hearing a public interest petition filed by Bangalore-based law student Sudipta Lenka, the Supreme Court has also asked the investigating agency to constitute a team within seven days to arrest the main accused and submit a report within two months.Pradhan, who hailed from Puri district and was working in a school at Tikiri in Rayagada, was burnt alive on the night of October 27, 2013.She had succumbed to her injuries in a private hospital at Visakhapatnam on November 1, 2013.She had petitioned the authorities about the sexual harassment she had suffered at the hands of her superiors, but her grievances had gone unheard till she was attacked.The apex court’s decision to order CBI probe into the murder has been welcomed by the opposition parties as well as people belonging to various sections of the society.