Odisha Channel Bureau Bhubaneswar/Puri, April 16: Thousands of people from Bhubaneswar and adjoining areas continued to throng Gadakantunia village on the outskirts of the city to have a glance of the Sudarshan Daru as the Banajag team started a two-day-long Maha Yagna near the Neem tree on Thursday.Shrotriya Brahmins in the team accorded hundreds of Ahutis by evening, while the Daitapatis continuing chanting Patal Nrusingha Mantra near the Yagna venue.The Brahmins and the Daitapatis were observing total fasting since Wednesday.The Yagna will end on Friday with Purna Ahuti to be conducted by the Gajapati King after the Brahmins complete 1008 Ahutis in the Yagna Mandap and 101 Ahutis near the Daru. 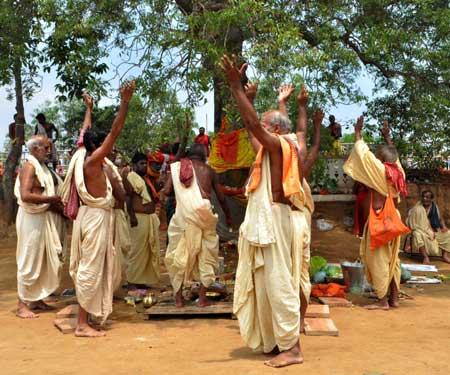 The Shrotriya Brahmins consecrated the three axes made of gold, silver and iron separately to be used for cutting of the Neem tree.The cutting of Neem tree is scheduled to begin at around 3 pm on Friday.As per the norms the Shrotriya Brahmins would hand over the gold axe to Bidyapati and silver one to Biswabasu and iron axe to the Biswakarma after the Purna Ahuti ritual.The cutting operation would begin with the Bidyapati touching the tree with gold axe and Biswabasu with silver and then the real cutting would be conducted by the Biswakarma with the iron axe.Meanwhile, Gajapati Dibyasingha Deb, the foremost servitor of Lord Jagannath temple went to the Shri Jagannath temple during the day and inquired about the facilities being raised at Koili Baikuntha for construction of four new bodies of the Lord Jagannath, Balabhadra, Subhadra and Sudarshan.The temple administration has been creating a covered enclosure at Koili Baikuntha considered as the sacred place for construction of new bodies from the Neem tree trunks and burial place of the old bodies inside the temple complex.The Gajapati as per the tradition entered the temple through the South gate along with his assistants and inspected the Darugruha, the spacious room for placing the Darus after construction till transfer of Brahmas.He too inspected the progress of the enclosure where the construction would take place.He discussed about progress of the work with the temple officials.All the four Neem tree trunks, designated for four Darus of the deities would be brought to Koili Baikuntha construction yard where the Biswakarmas would carve out shapes of the deities on the tree trunks under tight security and utmost secrecy.