Odisha Channel Bureau Jhankad (Odisha), April 18: Devotees and followers of Jagannath cult in Odisha’s Jagatsinghpur are ecstatic after Puri Jagannath temple administration accorded sanction on the Neem tree in front of Sarala shrine here for the carving out of Lord Balabhadra.As news of ‘Daru’ – holy logs – to be put to use for Lord’s idol spread fast since Friday morning, people are surging towards the sacred tree engulfing the area in and around the Maa Sarala shrine in frantic devotional fervour. 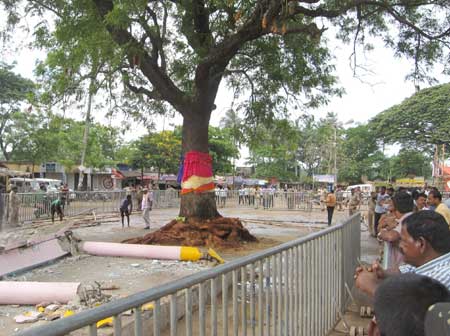 It’s a Godsend opportunity for us to look at the holy logs from close quarters.It gives us immense joy to know that Lord Balabhadra was present in the area.God would deliver divine blessing upon all of us.Identification of Daru is itself a matter of pride for people here, narrated Norottam Mishra, a devotee who came all the way from Keonjhar to catch a glimpse of the holy tree.The civil and police administration rose to the occasion to protect the sacred tree for the carving out of the holy logs.Iron barricades were installed with police keeping vigil.As devotees surged towards the shrine, crowd control measures were put in place with deployment of 16 platoons of police.“Our prioritised objective is to ensure the safety of holy logs and facilitate trouble-free darshan for thousands of devotees.The roadside kiosks that had sprung up around the Sarala temple were demolished to create space in the congested road leading to the temple.Arrangements are on war-footing for construction of Sabarpalli where the servitors of Jagannath temple would have their temporary sojourn”, said Jagatsinghpur Collector Satya Kumar Mallick.Elaborate arrangements have been made to regulate the vehicular traffic as thousands devotees from neighbouring Jagatsinghpur, Cuttack, Kendrapara and Jajpur district are expected to converge at the holy tree site to catch glimpse of Daru in the coming days.As the site has excellent road connectivity, crowd would swell in large numbers every day, the officials said.On the other hand, the Daru that was identified for Sudarshan idol at Gadakantunia village near Bhubaneswar was cut on Friday night after a Yagna was performed near the Neem tree.Thousands of devotees witnessed the Yagna and cutting of the holy tree.The logs would be taken to Koili Baikuntha in Puri for carving out of the Sudarshan idol.