Odisha Channel Bureau
Bhubaneswar: The 13th International Film Festival on Art & Artists is set to begin at the IDCOL Auditorium of the city today (Friday).

The three-day festival, being organised by the JD Centre of Art (JDCA) in partnership with Department of Tourism & Culture of the Odisha government, will be inaugurated by Chief Minister Naveen Patnaik at 5 pm in the evening. 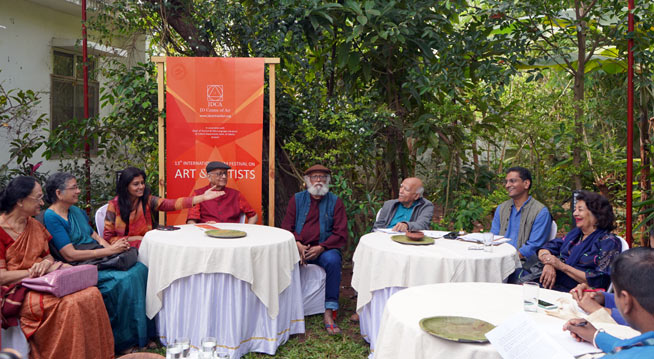 The inaugural event is open to all and will be followed by performances by a tribal dance troupe from Nilagiri, Balasore will perform Bhumija Dance and Gotipua dancers from Konark.

The following two days are action-packed with a bevy of films, and talks by acclaimed artists Bose Krishnamachari and Adwaita Gadanayak; and filmmaker Nandita Das.

The audiences will also get to interact with the photographer Raghu Rai and a host of film makers and the representative of the Australian High Commission who will present their films.

At a press meet organised by the JD Centre of Art here on Thursday, chairman of JD Centre of Art Jatin Das gave an overview of the context for the film festival from the perspective of setting up an international level art centre and museum rooted in Odisha.

Nandita Das spoke about the relevance of the festival and the variety of films that have been brought to the festival. She hopes that many over the weekend will make the most of the carefully curated Festival.

She also spoke about JDCA’s decision to make the festival biennial so that JDCA could reach out to film makers around the state, the country and the world to show beautiful films on Art.

Aruna Vasudev a veteran film festival curator who founded and was at the helm of the Cinemaya and Osian Film Festival, has helped create JDCA’s film festival and nurtured it over the years. She spoke about the pleasure of creating a thematic festival that has drawn upon the art and culture across the World.

JDCA Trustee Siddhartha Das gave many of the details on the forthcoming festival, all about some of the highlights of the festival from the 48 films from 17 countries with various talks, workshops and performances.

Some of the films to look out for are, Gurrumul a film on one of the most important musicians from Australia; Human’s Music by Yann Arthus-Bertrand, the environmentalist and renowned film maker with poetic aerial photography looks into the predicament of the human society; and the closing film Raghu Rai, An Unframed Portrait by Avani Rai, is an intimate portrayal of her father, one of the world’s most celebrated photographers.

He spoke about the various thematic strands that run through the festival such as visual arts, performing arts, design and architecture, traditional arts and crafts, communities and culture and animation films.

Renowned linguist Debi Prasanna Patnaik and social worker Gayatri Das, both trustees of JDCA, spoke about the importance of art and cinema.