Padhi (71) breathed his last at a hospital in Bargarh where he was undergoing treatment. He is survived by his wife Basanti Mohanty, son Biswarup Padhi and daughter Neha Padhi. 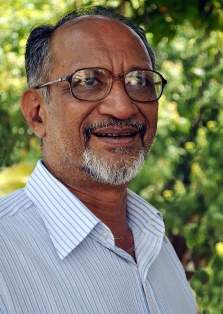 Born on September 16, 1949, Padhi did his schooling in Patnaikpada Town High School. A flamboyant student leader, Padhi did his post-graduation in English from Sambalpur University.

For a brief period he taught English in Panchayat College, Bargarh and then joined the Indian Information Service in Akashvani as a Transmission Executive.

He had served All India Radio and Doordarshan in various capacities in different places including in frontier posts like Arunachal Pradesh and Mizoram. He had retired as Deputy Director General, Prasar Bharati.

Even while in Central government service, Padhi was actively associated in literary and social reform activities. His voice over the radio on a serial – “Tike Sununta” – a reforming satire was very popular amongst the people of Western Orissa. ‘Gula Gupa’, another series of his essays, was broadcast by All India Radio which was educative and reforming in nature.

A poet, a lyricist, an essayist and an eloquent speaker, Padhi was a man of the masses. He was always in the forefront for development of lifestyle of the local people and the environment.

Several collections of his composed poems have been published and are considered of very high philosophical thoughts. His poem ‘Janmaandhara Indradhanu Darshana’ and other poems have been translated in many Indian languages.

He had co-authored ‘Sambalpuri – Koshali Language, A Profile’ which is considered an authentic reference of the grammar, phrases and usage of the rich language of western Odisha.

Many people who loved his work expressed their love and respect on different social media platforms as soon as the news about his demise broke.