Odisha Channel Bureau
Bhubaneswar: Odisha’s case fatality rate, the proportion of people who have died among the confirmed COVID-19 positive cases, currently stands at 0.38%, considerably lower than the national average even as the death toll breached 800-mark on Monday. 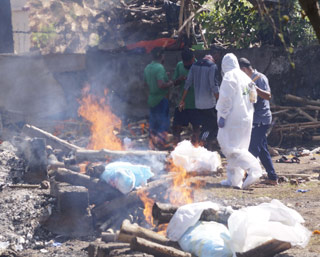 The lower fatality rate in the coastal State is, however, dogged by a fair share of controversy with skeptics tending to believe that the fatality figure is being under-reported by State’s COVID-19 managers.

The mismatch in the death figure reeled out by the health and family welfare department is too glaring to escape notice.

Call it slipup or wilful act of under-reporting, the Nuapada district in western part of the State has officially reported 19 deaths. In sharp contrast, the government’s official COVID-19 portal has trimmed down the fatality toll in the district to two only.

When asked about the under-reporting, he said “we are dispatching the meticulous details of COVID graph to the State’s control room on a daily basis. It might not have been updated on their part”.

As against the 1.5% case fatality rate in the country, Odisha’s death rate of 0.38% implies that only one patient is succumbing to infection out of 300 infected persons.

While the government boasts of reducing the fatality, the ground realities, if the version given from various quarters is to be believed, tell a different tale altogether.

The death is being under-reported and the toll is being kept on a lower side by the government agencies. The number of bodies of COVID-19 patients being disposed at crematoriums at Satya Nagar (Bhubaneswar) and Khan Nagar (Cuttack) are larger in number than what the State government’s health department’s portal is projecting on a daily basis, alleged a cross section of people.

“My brother showed symptoms of the virus. He was not tested. Later, he died of respiratory ailment. I have been told of similar cases of symptomatic people dying without being tested, said a distraught resident of old town area in Bhubaneswar while refusing to be named. The bereaved man is scared of the fact that revealing identity may invite unwanted trouble.

The delayed declaration of the test report on the positive status is doing no good. The suspected virus carrier is getting exposed to the community by mingling at markets and public places. As it is often happening, the test report is being made public 48 or 72 hours after the sample is drawn. By the time the report comes out, the infected man turns out to be a super-spreader.

Meanwhile, the Odisha government has withdrawn the mandatory COVID test provisions of deaths reported in healthcare facilities, amidst growing public anger over inordinate delay over the release of bodies for the last rites.

The State authorities have recently lifted the test provisions as the delayed release of bodies from hospitals was compounding the woes of the bereaved family members. It happened on countless occasions that the bodies were dumped in hospital for almost 48 hours and were being handed over to relatives after the test report.