Santosh Patnaik
Visakhapatnam: In an early morning crackdown, the police and the revenue officials bulldozed a part of the boundary walls of GITAM (deemed to be university) and GITAM Institute of Medical Sciences and Research here on Saturday. 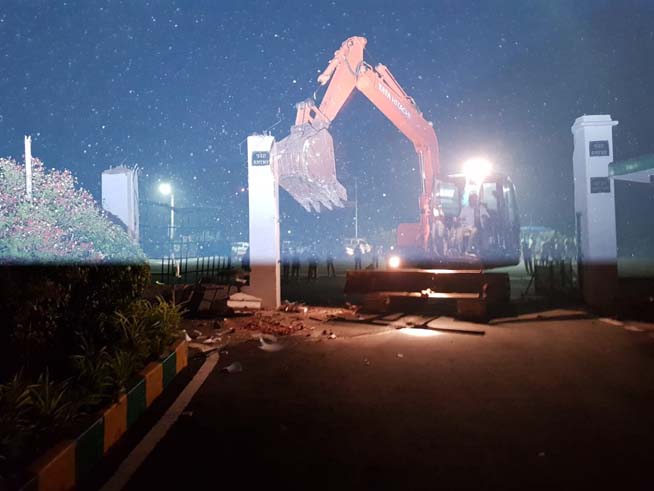 Sources said the officials mobilized men and machine in the early hours including bulldozers and heavy earth moving equipment to raze to the ground part of boundary walls of the deemed to be university and the medical college on the charge of encroachment.

The sea-facing university which earned reputation over the years for ensuring high percentage of placement has campuses at Hyderabad and Bengaluru. It had plans to set up a campus in Bhubaneswar but later dropped it reportedly due to strategic reasons. 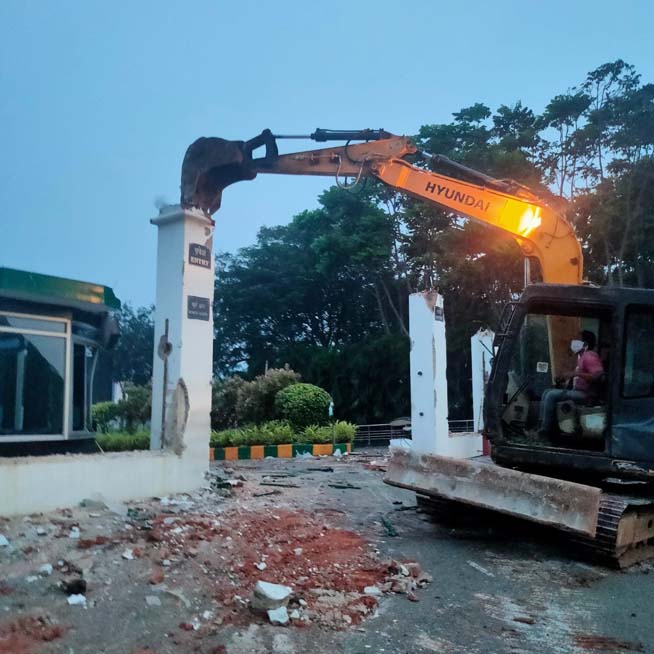 A GITAM official said no notice was served to them before demolishing the walls. An official clarification is yet to be issued.

Before carrying out the meticulously planned ‘Operation Demolition’ the entire stretch of beach road leading to the educational Institutions was barricaded. The hospital belonging to the medical college houses several COVID patients.

The Vizag campus of GITAM deemed to be university spread over 100 acres, which offers B.Tech, M.Tech and management courses, attracts several students from Odisha, West Bengal and other States.

Ruling YSR Congress Party spokesman and Anakapalle MLA Gudivada Amarnath on Saturday denied the allegations of TDP leaders and said that there is no need for the government to be vindictive towards the opposition leaders.

Defending demolition of boundary walls of GITAM institutes here, he stated that officials have taken appropriate action against encroachments of government lands.

The MLA told reporters that GITAM, which belongs to the son-in-law of TDP MLA and film actor Nandamuri Balakrishna, has encroached the government lands to an extent of 40 acres worth Rs. 800 crore. During TDP term, then Chief Minister Chandrababu Naidu gave away valuable lands in Visakhapatnam to his dear ones and the GITAM management was prime beneficiary. It was revealed in a preliminary inquiry by Revenue officials that the university has encroached government lands and the officials took appropriate action accordingly.

He said while the State government is responsible for safeguarding the lands and taking action against illegal encroachments, the Opposition leaders are spreading false propaganda claiming that the government is vindictive. The previous government failed to take action on land encroachments in Visakhapatnam and didn’t make the report of Special Investigation Team on land grabbing public.