The YSRCP Government, which was upset over deferring of the local body elections on March 15 without consulting it to prevent spread of Coronavirus, had removed SEC through an Ordinance route. 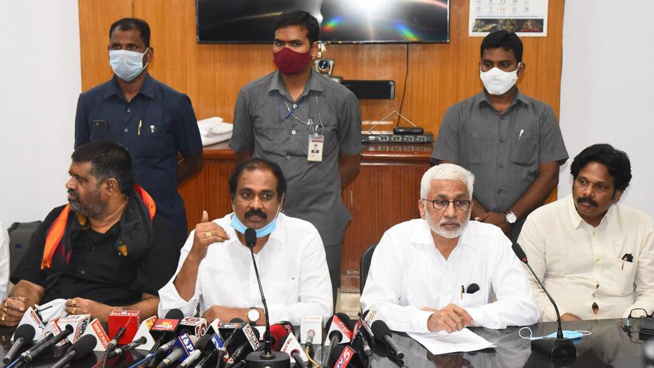 While the YSRCP strongly opposed the bid to conduct polls for urban local bodies and panchayat raj institutions in view of threat of another surge in Corona cases during winter, TDP president N. Chandrababu Naidu accused YSRCP of using the pandemic as an excuse to avoid severe drubbing in the elections.

Ramesh Kumar, a retired IAS officer was appointed as SEC for five years in April, 2016 during tenure of TDP Government.

The YSRCP Government, which was upset over deferring of the local body elections on March 15 without consulting it to prevent spread of Coronavirus, had removed SEC through an Ordinance route.

The Ordinance reduced the term of SEC from five to three years. Ramesh Kumar later got an order from AP High Court leading to his reinstatement after a legal battle.

YSRCP Parliamentary Party leader V. Vijayasai Reddy and Agriculture Minister Kurasala Kannababu told the media here on Friday that the SEC was dancing to the diktats of Chandrababu Naidu and thus rushing for local body elections, despite the prevalence of COVID pandemic.

Reddy, considered No. 2 in the ruling party criticised the SEC for not following the constitutional guidelines and having private confabulations with the TDP leaders.

The elections were deferred when the State had registered less than five cases and on what grounds now elections were planned despite a volatile situation, he asked.
The fear of a second wave was looming large, he pointed out.

Reddy said that Ramesh Kumar might join TDP after his retirement, as the TDP members were having a blind trust in him and he might soon usurp TDP leadership.
Kannababu said SEC Ramesh Kumar was prejudiced towards Opposition leaders and taking orders from Chandrababu Naidu.

Ramesh Kumar had postponed the elections in March by not taking the government into consideration in violation of established principles, he stated.