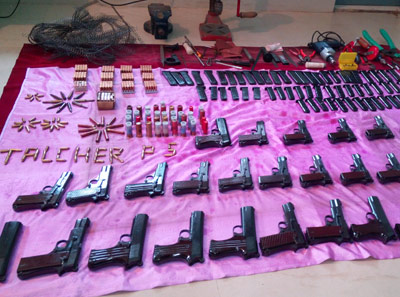 Odisha Channel Bureau Angul, Aug 12: Police in Angul district of Odisha have seized a large number of firearms by raiding an illegal gun factory and arrested five persons in connection with the case.As many as 31 pistols and 500 live cartridges of different sizes, gun powder, ballistic gelatin and various equipments for making guns were recovered by Talcher police during the raids on Sunday night.The police first raided the gun manufacturing house at Champapasi and then raided the house of the main accused Tukuna Swain (36) at Paikasahi.They seized the pistols and bullets form the house of Swain while the manufacturing materials were found from a rented house.Police sources said that many incriminating documents and phone numbers were seized during the raids which will provide clues of involvement of many other people directly or indirectly.Main accused Swain is having criminal background and was earlier arrested by Jagatsinghpur police for possessing illegal arms.He was also charge-sheeted in some criminal cases in Cuttack, police said.The main accused in still absconding and efforts are on to arrest him, police said Tuesday.