Odisha Channel Bureau Bhubaneswar, Aug 25: Xavier Institute of Management, Bhubaneswar, conducted Communiqué 2014, the first of its kind media conclave, organized by IlluminatiX, the Media and PR cell of XIMB on Sunday.Communiqué aimed to bring together media stalwarts and future managers to reflect on the changing media-scape and its increased relevance in the lives of customers and managers alike, with a special focus on digital media.The topic of discussion for the year was “Digital Media: Empowering Customers And Facilitating Managers For The Future”. 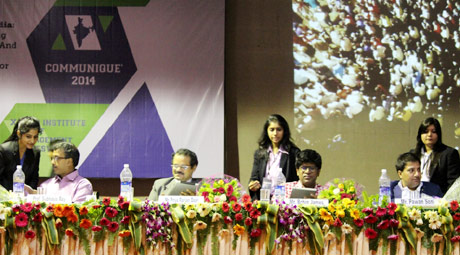 The panel of speakers included media moguls like Priya Ranjan Dash, senior journalist and commentator; Bobin James, Associate Director and Editorial Head at Viacom18 Media Private Limited; and Pawan Soni, Head, Brand Solutions and Trade Marketing, FOX International Channels.The proceedings started with Subhashis Ray, the moderator for the occasion, welcoming the speakers and inviting them to light the ceremonial lamp.Prof.Ray set the stage by raising a few pertinent questions for the speakers to address, for example, whether reality shown by media can be untrue, how independent is independent media.He even questioned the role of media as the manufacturer of consent responsible for conforming viewers to the global reality.He left the audience thinking as to how social media has left the people extremely connected yet terribly lonely.In an attempt to unpack today’s theme he asked, “What type of power are we talking about when we say empower?”Dash began his speech by laying down two very important propositions – all media will become digital media, and all markets will become digital markets.One crucial point he raised was how the definition of media has become so blurred that it is difficult to figure out what is the carrier and what is the medium.James too talked about the blurring boundaries of media.Earlier traditional media was divided into a diverse set of consumers, creators and advertisers.However, now everyone is a creator, a publisher.He went on to discuss about how the major airlines and e-commerce sites in the world are in the red and are depending on Digital Media to rebuild their brand and generate revenue.Soni’s presentation was based on the most powerful tool that creates brands- Ideas.According to him, consumers are no longer passive participants in brand building and ideas are the means that enable them to do something.He highlighted how brands like Apple, Tata Tea, and Thumbs Up used ideas to propagate a notion and how an idea can act as a bridge between a product and a consumer.He captivated the audience with the help of various videos that demonstrated the use of ideas to revolutionize brand building.The highlights of the conclave were, an exclusive video sent over by Tech-Guru Rajiv Makhani and a message sent by famous journalist and editor Mid-day Sachin Kalbag who unfortunately could not be present.Makhani in his video stressed that irrespective of the kind of business one is involved in, Digital Media is the platform that can help reach out to customers.He also cautioned the students about the various pitfalls of Digital Marketing, namely, the ancient style in which it is executed, its palpable scare in the future, its intrusion in the privacy of people etc.Kalbag’s message titled Importance of Words spoke of how we need to ensure we communicate the right message through our words.He urged the students to become knowledge-heavy instead of being overloaded with information.He implored them to use the power of words for the good of human kind through his message.The conclave concluded with the launching of the XIMB blog, XIMBeats, which will chronicle the life and times of all XIMBians.