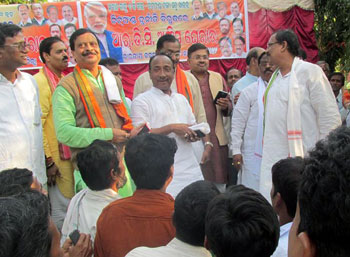 Odisha Channel Bureau Bhubaneswar, Nov 25: Opposition Congress and BJP have launched a scathing attack against Odisha Chief Minister Naveen Patnaik over the mega chit fund scam in which many leaders of the ruling Biju Janata Dal have been arrested by the CBI.While the BJP organised a massive demonstration and gheraoed the office of Revenue Divisional Commissioner (Central) at Cuttack demanding Patnaik’s resignation on Tuesday, Congress announced at Bhubaneswar to hold protest rallies and dharnas at all district headquarters in the State on November 29 demanding CBI inquiry against the Chief Minister.Both the parties blamed the BJD headed by Patnaik for stalling the proceedings of the State Assembly for the past several days in their attempt to avoid a thorough discussion on the chit fund scam.Hundreds of BJP workers, including its State unit president Kanak Vardhan Singh Deo and senior leader Bijoy Mohapatra, were arrested when they tried to break the police cordon and barge into the office of the RDC to submit a memorandum on the chit fund scam.The BJP too has announced to launch a statewide agitation against Patnaik and his party in the coming days.Addressing the BJP workers, Mohapatra said that while the CBI has already reached Naveen Nivas, the BJD leaders were saying that the CBI investigation is politically motivated.Leader of Opposition in the State Assembly told journalists at a press conference at the Congress Bhavan in Bhubaneswar that the Congress will organise protest rallies and dharnas across the State demanding interrogation of Patnaik by CBI for his role in the chit fund scam.Meanwhile, the Assembly proceedings were affected for the fifth day on Tuesday with opposition parties demanding a discussion on the chit fund scam and the BJD legislators trying to avoid a debate on the issue.