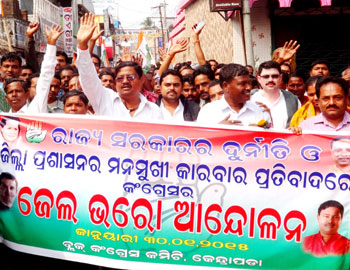 Odisha Channel Bureau Kendrapara, Jan 30: Registering protest against politicisation of government machineries, the district wing of Congress today registered its disapproval and staged dharna in front of the District Collectorate.Hundreds of Congress workers led by two sitting congress MLAs from the district took out a rally and staged a protest meeting against what they alleged the partisan handling of day-to-day function of the administration by officials.Everybody right from top to bottom of the district administration is dancing to the tune of ruling BJD party leaders.Each action of officials including the collector is being guided by political consideration.People owing affiliation towards ruling BJD are favoured for consideration for social security scheme and welfare scheme cover, alleged Debendra Sharma, president of the district Congress Committee and MLA of Aul Assembly constituency.Corrupt officials have been handpicked by ruling party leaders to run the administration.Bribery has become the order of the day.No work gets done in Kendrapara unless money changes hand.Right from engineering wing offices to Tehsil offices to District Collectorate, brazen soliciting of bribe by dishonest officials has become a disconcerting and nefarious trend here.Gauging the sorry state affairs, it leads one believe that every government offices including police stations have turned into ruling BJD offices, he charged.Police are at the receiving end of an out and out corrupt administration.Thanks to the ineptitude of the administration, distress sale of paddy has lurked its ugly head in the district.The required number of paddy procurement centres are yet to come up here adding to the misery of distressed farmers of this agriculture-based district, alleged Rajnagar MLA Anshuman Mohanty while addressing the protest rally.