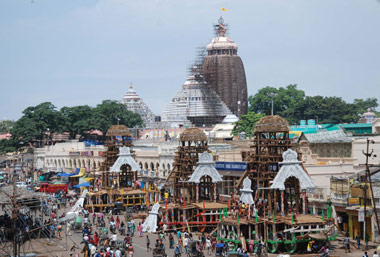 Odisha Channel Bureau Bhubaneswar, June 18: An all-party meeting held in the Odisha Assembly premises on Wednesday evening decided to set up a Committee headed by State Law Minister Arun Sahu to resolve the controversy over devotees climbing the chariots and touching the deities during Rath Yatra.The all-party meeting that presided over by Odisha Assembly Speaker Niranjan Pujari was attended by Chief Minister Naveen Patnaik, Leader of Opposition Narasingha Mishra, Bharatiya Janata Party leader K.V.Singh Deo and others.“The views of all those present were heard and it was decided to ensure the smooth conduct of the annual Rath Yatra.The meeting was successful,” the Speaker told journalists after the meeting.Mishra said that all leaders present in the meeting were unanimous that the State government should take all measures to make the Rath Yatra peaceful.He said that the Committee to be headed by Puri legislator Maheswar Mohanty will talk to the stakeholders to resolve the controversy over devotees climbing the chariots of Lord Jagannath, Lord Balabhadra and Devi Subhadra during the car festival that was scheduled to be held on June 29.The controversy had thickened with Puri Shankaracharya Nischalananda Saraswati and Naveen Patnaik Government taking different stand on the issue.Shankaracharya Nischalananda Saraswati had expressed displeasure after Odisha government ignored his advice that devotees should not be allowed to climb chariots of deities during Rath Yatra.Going against the Shankaracharya’s suggestion that devotees should not be allowed to climb the chariots and touch the deities, the State government had on June 11 banned climbing of chariots by devotees on the days of Rath Yatra, Bahuda Yatra and Sunabesha.Soon after the Law Minister Arun Sahu announced the government’s decision, a spokesperson for the Daitapatis, a section of servitors of Lord Jagannath, had clarified that the devotees will not be allowed to climb when the chariots were on the move.The devotees can climb after the chariots reached their destinations, the spokesperson had maintained.