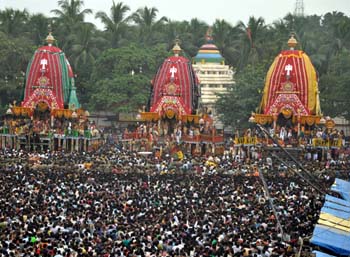 Sulochana DasBhubaneswar, June 19: An early decision to resolve the controversy over devotees climbing the chariots and touching the deities during Rath Yatra in coastal Odisha town of Puri was unlikely.This became clear after the Committee that was formed on Wednesday failed to resolve the issue in its first meeting here on Thursday.The Committee was formed as per the decision taken at an all-party meeting convened by Assembly Speaker Niranjan Pujari on Wednesday evening.Members of the Committee who met for the first time and discussed issue decided to wait till the High Court passed its orders on a public interest petition that was filed earlier seeking judicial intervention for smooth conduct of the car festival of Lord Jagannath.Meanwhile, the High Court issued notice to the State government on a petition that was filed earlier and posted the matter for further hearing on Friday.Questioning the State government’s intervention in the matter, the petitioner had submitted that the State government should accept the recommendations of Puri Shankaracharya.The Committee, headed by Puri legislator Maheswar Mohanty, is scheduled to meet again on Friday evening.The Committee may not be able to resolve the controversy in its second meeting on Friday if the High Court did not dispose off the petition and pass its orders on Friday. In another development, senior State Excise Minister Damodar Rout has come out openly in support of the Shankaracharya’s view that devotees should not be allowed to climb the chariots or touch the deities.Opposition BJP has also supported the recommendation of the Shankaracharya that devotees should not be allowed to climb the chariots of the deities during the Rath Yatra.The recommendation of the Shankaracharya was strongly opposed by the Daitapati servitors of Lord Jagannath resulting in the controversy. The Speaker had called an all-party meeting after legislators cutting across party lines raised the issue in the Assembly on Tuesday and Wednesday.An early resolution of the controversy was necessary as the issue had threatened to cast its shadow over the Rath Yatra, which was scheduled to be held on June 29.