Odisha Channel Bureau Kendrapara, June 8: With the arrest of five criminals, police have solved the May 23 broad-day light murder of a night watchman at the at the Rural Works Development divisional office.The victim security guard- Somnath Das (48) had to part with life as he had bravely countered the lawbreakers from extorting the engineers of the department. 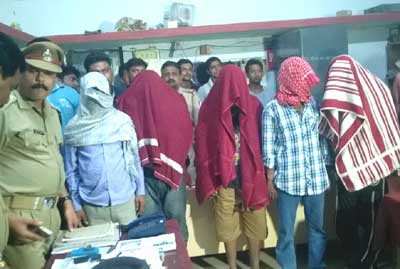 The brave soul was gunned down by armed criminals during wee hours as the man on security duty had fought with the criminals as the criminals had barged into the office.“It was tender-fixing and extortion-related murder.The victim had invited the wrath of the assailants as he had thwarted their extortion bids on several occasions in the past”, said Jagatsinghpur Superintendent of Police Sudha Singh. Six criminals arrested with in connection with the murder are Paramananda Jena, Manoranjan Roy, P.Mallik, Manoj Kumar Lenka and Bikram Parida.All are natives of Jagatsinghpur district.Arms were seized from their possession.They confessed to the crime, police said.Three days before the murder, the mastermind of the crime-Jena- was intercepted by night watchman Das while Jena was trying to create disturbances in the RD division office.Das had beaten up Jena and locked up in a room of the office.Seething with vengeance, Jena had vowed to kill the night watchman Das.Flanked by four of his accomplices, Jena had perpetrated the cold blooded murder by gunning down Das from close range, police said.The CCTV footage came in handy in cracking the murder, which had triggered public outrage.The mobile phone of the prime suspect Jena was tracked leading to the arrest of accused persons.The arrested assailants had a history of crimes.All of them are facing trial in at least a dozen of criminal cases.The mastermind Jena was earlier arrested with connection with attacking a junior engineer of RD division, beating of office staffs and setting a RD official quarter on fire, told the police. Criminals opened four rounds from close range and the bullets had pierced into victim’s chest and abdomen area.The victims had died on the spot.There was no eyewitness to the brutal killing as it occurred during wee hours.The employees’ division office was shell-shocked to find the motionless body Das lying in a pool of blood near the staircase of the two storied building.