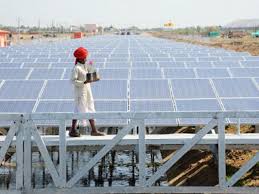 Pragya Paliwal GaurIndia is running the largest renewable capacity expansion programme in the world.The government is aiming to increase share of clean energy through massive thrust in renewables.At Global Conference “REINVEST 2015” in February2015, Prime Minster Shri Narendra Modi’s statement “India is graduating from Megawatts to Gigawatts in Renewable Energy production”, set up the higher expectation of clean energy generation in the country.The government has up-scaled the target of renewable energy capacity to 175GW by the year 2022 which includes 100 GW from Solar power.The government has revised the National Solar Mission target of Grid connected Solar Power Projects from 20,000 MW by 2022 by five times to generate 1,00,000 MW solar power by 2022.The target will principally comprise of 40 GW Rooftop and 60 GW through Large and Medium Scale Grid connected Solar Power Projects.To achieve these targets, the Union Ministry of New and Renewable Energy has initiated several projects like scheme for Development of Solar Parks and Ultra Mega Solar Power Projects; Scheme for Development of Solar PV Power Plants on Canal Banks/Canal tops; Scheme for setting up 300 MW of Grid connected Solar PV Power Projects by Defence Establishments under Ministry of Defence and Para Military Forces with viability Gap Funding ; Scheme of setting up 1000 MW of Grid connected Solar PV Power Projects with CPSUs with Viability Gap Funding; Scheme for setting up of 15000 MW of Grid connected to achieve the target; setting up of 2000 MW Grid connected solar power with Viability Gap Funding through Solar Energy Corporation of India (SECI).Another ambitions Scheme has been launched by the Ministry for Roof Top solar installations.Rajasthan shines on the solar energy map of India with 300-330 clear sunny days comparable to the deserts of California, Nevada, Colorado and Arizona.Within the state the districts such as Barmer, Bikaner, Jaisalmer and Jodhpur are the key regions with best solar radiation.Rajasthan is endowed with two critical resources that are essential to solar power production: high level of solar radiation (6-7 kwh/m2/day) and large tracts of relatively flat, undeveloped land.Rajasthan came at number one place in the country with 1766 million unit power production during the year 2015-16 in the field of solar power.This year, there has been a growth of 1.6 percent in solar power production.During 2015-16 on an average, 4.83 million unit power was produced daily in Rajasthan.At present, the total commissioned capacity of solar power is 1284 MW in the state.Special efforts have been made in Rajasthan for increasing the production of Solar Power in the State.Roof top SPV systems are being promoted in a planned manner and work is on for setting up of 6 MW of Roof Top SVP systems in the state.1.50 lakh solar power domestic units have been set up in rural and urban areas of the state.13,943 Solar Pump sets have been installed all over the state.Ministry of New and Renewable sources of Energy, Government of India has sanctioned 3 Solar Parks – 2180 MW capacity in Village Bhadla of Jodhpur, 750 MW in Phalodi-Pokaran and 1500 MW Solar parks in Fatehgarh Phase I B in Jaisalmer district.According to Solar Power Policy 2014 of the state, Government of Rajasthan is giving preference to Public Private Partnership in establishment of Solar Power Parks.One such project is the unique 1 Megawatt India One Solar Thermal Power Plant being set up by the World Renewal Spiritual Trust, a registered Charitable Trust/solar research centre and a sister organisation of the Brahmakumaris, at Mount Abu in Rajasthan.The thermal solar plant built jointly by the World Renewal Spiritual Trust and Germany’s Fraunkhofer institute (ISE) and the Ministry of New and Renewable Energy’s support of the project under its R&D Scheme with 12.6 crores.Being built with the cost of almost 100 crores the plant will start generating power in a year.The thermal solar power plant will be the first of its kind in the world in dish technology in direct steam generation mode, with full thermal storage for 16 hours continuous operations for base load.With Public Private Participation and active follow up on the Solar Power Policy in the State, the day is not far when Rajasthan will become self-sufficient and a surplus state in terms of solar power.Pragya Paliwal Gaur is Director (M&C), PIB, Jaipur