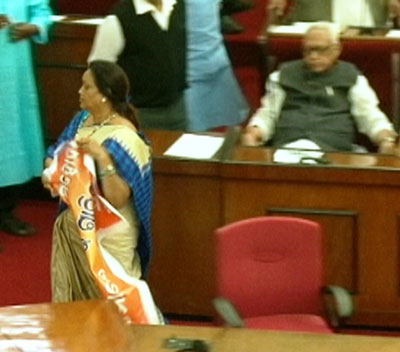 Odisha Channel Bureau Bhubaneswar, Nov 22: Odisha Agriculture Minister Pradeep Maharathy finally tendered an apology to BJP lady legislator Radharani Panda at an all party meeting that was convened by State Assembly Speaker Niranjan Pujari on Saturday.The proceedings of the State Assembly, which were disrupted for the third consecutive day, were conducted smoothly on Saturday evening after the Minister apologised for using abusive words against Panda.Agriculture Minister Pradeep Maharathy expressed deep anguish over the incident and assured not to repeat the same in future, the Speaker announced in the House.”In the all-party meeting, the Minister tendered his apology for the incident and called me ‘sister’.After that, I called off my dharna,” Panda told journalists after she ended her sit-in in front of the Speaker’s podium.While Panda continued her protest against Maharathy’s remarks by sitting on dharna, opposition legislators continued to raise slogans against the Maharathy for using derogatory words to the lady legislator.Maharathy had used derogatory words against Panda while she was raising slogans against Chief Minister Naveen Patnaik along with other opposition MLAs on the opening day of the winter session of the Assembly on Thursday over the mega chit fund scam. While both Congress and BJP stalled the proceedings of the Assembly over the chit fund scam and Maharathy’s remarks, the ruling BJD legislators countered them by raising the issue regarding delay in release of Central assistance for the victims of cyclone Hudhud.