BJD and BJP two sides of the same coin: Jairam 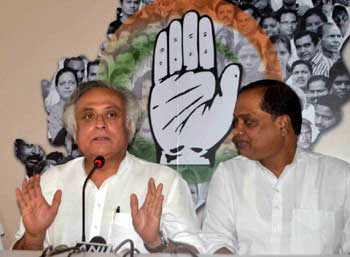 Odisha Channel Bureau Bhubaneswar, April 6: Former Union Minister and senior Congress leader Jairam Ramesh today said that “the secret pact between the Biju Janata Dal and Bharatiya Janata Party has now become an open secret”.“The BJD and BJP are the two sides of the same coin,” Jairam said at a press conference at the Congress Bhavan in the city where he urged the BJD to oppose the controversial land acquisition Bill in the Rajya Sabha.Observing that the land acquisition Bill was `anti-farmer and anti-tribal”, Jairam said an opportunity has come for the BJD to prove its commitment to the farmers and tribals in the State.The senior Congress leaders described the controversy over proposed amendments in the land acquisition as the ‘Mahabharata’ of the 21st Century in which Prime Minister Narendra Modi playing Duryodhan leading the Kauravas and the Congress is leading the Pandavas.He urged the BJD president and Chief Minister Naveen Patnaik to abandon the army of the Kauravas and support the Pandavas.Jairam said the Congress will continue to oppose the amendments as it wants the Right to Fair Compensation and Transparency in Land Acquisition, Rehabilitation and Resettlement Act, 2013 back.He alleged that the BJP was spreading lies over the land acquisition Bill as the Modi Government wants to protect the interests of the private companies wanting to acquire land belonging to farmers and other land owners.