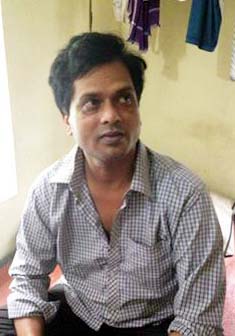 Odisha Channel Bureau Berhampur, July 19: A local court on Saturday remanded Maoist leader Sabyasachi Panda to police custody for 10 days.The Sub-Divisional Judicial Magistrate remanded the Maoist leader to 10-day police custody even though the Berhampur police had prayed for grant of 15 days’ remand.The police had sought to take the accused into their custody to question him in connection with various cases in which he had been named accused in different districts of Odisha.The court also allowed a prayer made by Sabyasachi’s counsel that either his counsel or family members can remain present during his interrogation by the police.Panda was produced in the court after his judicial remand for a day had ended.The court had remanded him to one-day judicial custody on Friday pending hearing on the petition of police seeking custody of the Maoist leader.Odisha police have said that Sabyasachi Panda was accused in more than 100 cases.The highest of 42 cases were pending against Panda in Gajapati district, while 21 cases were pending in Kandhamal, 20 in Ganjam, 18 in Rayagada, nine in Nayagarah and two in Berhampur.Sabyasachi was involved in the killing of 25 security personnel and 34 innocent common people, Odisha DGP Sanjeev Marik had said on Friday.The major cases against him include killing of Vishwa Hindu Parishad leader Swami Lakshmanananda in Kandhamal district in August 2008, arms loots in Nayagarh and Gajapati districts, and abduction of two Italians in Kandhamal in 2012.The Maoist leader was arrested at 1 am on Friday from a house in Badabazar locality of Berhampur town.