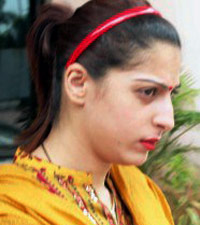 Odisha Channel Bureau Bhubaneswar, Oct 10: Mumbai-based model and television serial producer Preeti Bhatia was arrested on Friday by the Central Bureau of Investigation in the chit fund scam relating to the Artha Tatwa Group.Preeti was arrested here after several rounds of questioning by the CBI during the past few weeks.Though she had claimed before the media persons here on Thursday that she was in no way connected to the chit fund scam, Preeti was formally arrested after she was quizzed for the fifth time on Friday morning.The model from Mumbai is the first woman and someone from outside Odisha to be arrested in connection with the mega chit fund scam in which several chit fund company operators and three media house owners have already been arrested by the CBI.According to sources, Preeti was one of the directors of a Mumbai-based entertainment company along with Artha Tatwa Group chairman Predeep Sethy and another woman.The house of Preeti Bhatia had been raided by the CBI before she was summoned to come for questioning in Bhubaneswar.During the course of investigation, the CBI has reportedly found that funds from Artha Tatwa Group was diverted to the bank accounts of Preeti, the company and her relatives without any valid reason.