The protests were organised amid tight police security as the foundation stone for Amaravati, touted as futuristic people’s capital by Prime Minister Narendra Modi, completed five years on Thursday. 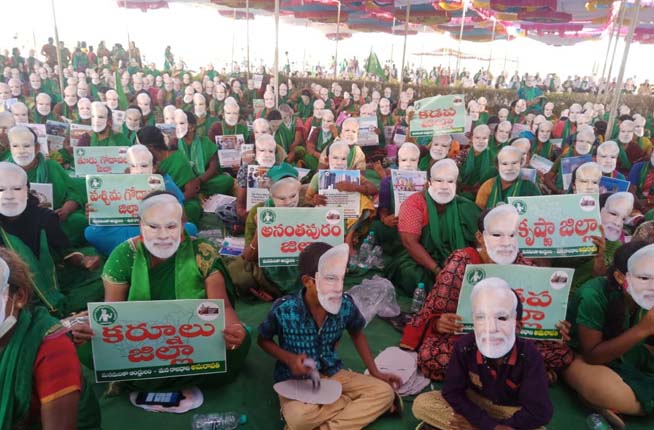 Then Chief Minister and Telugu Desam Party president N. Chandrababu Naidu, who had acquired 34,000 acres of fertile land from farmers under Land Pooling Scheme (LPS), squarely blamed his successor Jagan Reddy for his decision on three capitals to bulldoze his dream to create an international riverfront city with the support of Singapore, World Bank and other agencies.

While a section of land-losers continued their stir at Tadepalli, which completed 300 days on October 12, few others staged a protest against pro-Amaravati agitators.

“The decision by our popular leader Jagan is aimed at decentralized development in all three regions,” Agriculture Minister K. Kannababu said.

Though a bill on three capitals has been approved by the State Legislature, its implementation has become sub judice.

There is also court order not to go ahead with investigation ordered by the State into alleged ‘insider trading’ into capital choice by the erstwhile TDP Government after bifurcation of AP in 2014.

Chief Minister Jagan recently in a letter complained to Chief Justice of India against alleged interference by one of the senior SC judges Justice N.V. Ramana into AP affairs. YSRCP, the ruling party accused the Judge for a series of hostile judgements against the State Government.

Meanwhile, TDP national general secretary Nara Lokesh said they would continue to make all-out effort to stall the shifting of capital from Amaravati to Visakhapatnam.

The State BJP leadership which vehemently opposed the move on three capitals is now maintaining silence over the issue after the Ministry of Home Affairs clarified in Parliament that it was the prerogative of a State to decide the location of the State capital.