Metro Rail work to be grounded in Vizag in New Year

Santosh Patnaik
Visakhapatnam: The Andhra Pradesh Government is gearing up to launch work on the ambitious Rs.22,000-crore Metro Rail Project in Visakhapatnam, known as the City of Destiny, in the New Year.

Notwithstanding the impact of Covid-19 pandemic on the release of Central funds and the State revenue realisation, Chief Minister Y.S. Jagan Mohan Reddy has directed the AP Metro Rail Corporation Ltd (APMRCL), a special purpose vehicle, to expedite work on a top priority. 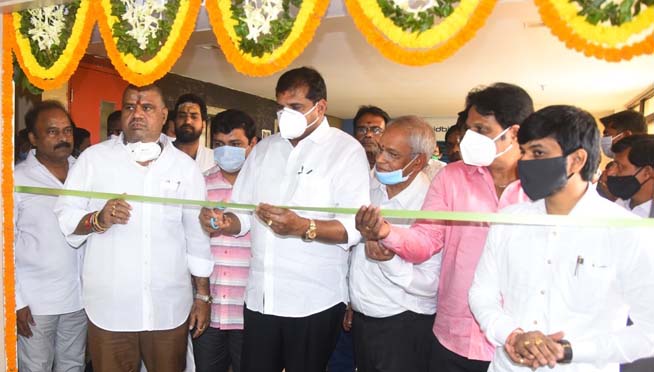 Urban Development & Municipal Administration Minister Botsa Satyanarayana inaugurating the regional office of APMRCL
As a first step the regional office of APMRCL was inaugurated by Minister for Urban Development & Municipal Administration Botsa Satyanarayana in the presence of Minister for Tourism M. Srinivasa Rao, and others here on the occasion of Dussehra.

Satyanarayana said they would kick off work on the project to decongest traffic and ensure hassle-free travel in the New Year.

The Detailed Project Report for 140.11-km Metro Rail is in advance stage of preparation by Urban Mass Transit Company Ltd (UMTCL). It will connect jaggery hub of Anakapalle to the proposed international airport being developed at Bhogapuram in neighboring Vizianagaram district by GMR Group through important locations in the city.

The unique feature of the project is to have driverless trains without any overhead electrical lines unlike other Metro Rails.

The DPR for the project is expected next month. The Minister said the tenders would be issued immediately after approval of DPR.

APMRCL Managing Director Ramakrishna Reddy said all efforts were being made to complete the prestigious project in two years. Private partner will be sought to fund 48% of outlay as the State has decided in-principle to mop up 52% as its contribution.