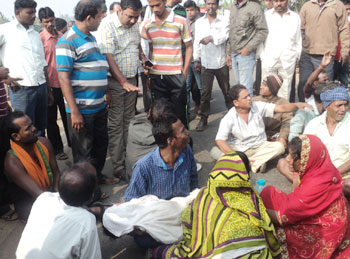 Odisha Channel Bureau Cuttack, Dec 12: Two tiny tots, students of a kindergarten school in Nischintakoili area of Cuttack district, died today while 17 other nursery students were injured in a tragic road accident today morning on the Nischintakoili-Lalitgiri road.Angry people protesting against unsafe mode of transportation for school children later stage road blockade disrupting vehicular traffic on the Cuttack-Chandbali State highway for over four hours.The tragic accident has brought to the fore the unsafe journey of children to various schools even as gross absence of measures to regulate such risky ride is imperiling lives of school children.The accident occurred at about 7.30 am when the overloaded van carrying 19 children overturned at a place which is about one km from the Nischintakoili marketplace.As loud and piercing cry of children trapped inside the ill-fated van rent the early morning air, people rushed to the accident site to rescue the children.Five-year-old Rajesh Behera died on the spot while six-year-old Krushna Chandra Sahu who was shifted to SCB Medical College and Hospital at Cuttack later succumbed to injury.Seventeen other injured students undergoing treatment at nearby government-run hospital are out of danger.All the children were students of nearby private-run kindergarten school.The ill-fated Tata Magic van was certified to carry seven persons including the driver.It, however, was packed like sardines with as many as 19 children literally dumped inside it.The van was not having the fitness certificate to ply on road.Besides the driver who immediately fled after the mishap was not equipped commercial motor transport license, police said.Arrest warrant has been issued against the van owner under Orissa Motor Vehicle Act provisions.Cases under Section 304-A ((causing death due to rash and negligent action) and Section 304-II (culpable homicide not amounting to murder) of Indian Penal Code have been registered against the driver, the police official added.